With the Mantis Q, Yuneec presents a compact and robust travel drone that can do more than just capture beautiful moments as unique pictures and 4K videos. The Mantis Q is guaranteed to be good fun thanks to its innovative voice control, rapid Sport Mode, long flight time, automatic flight modes, practical face recognition, and integrated Social Sharing Function. Designed to be an uncomplicated travel companion that can be taken anywhere, it is ideal for outdoorsy people, gadget lovers, and adrenaline junkies. 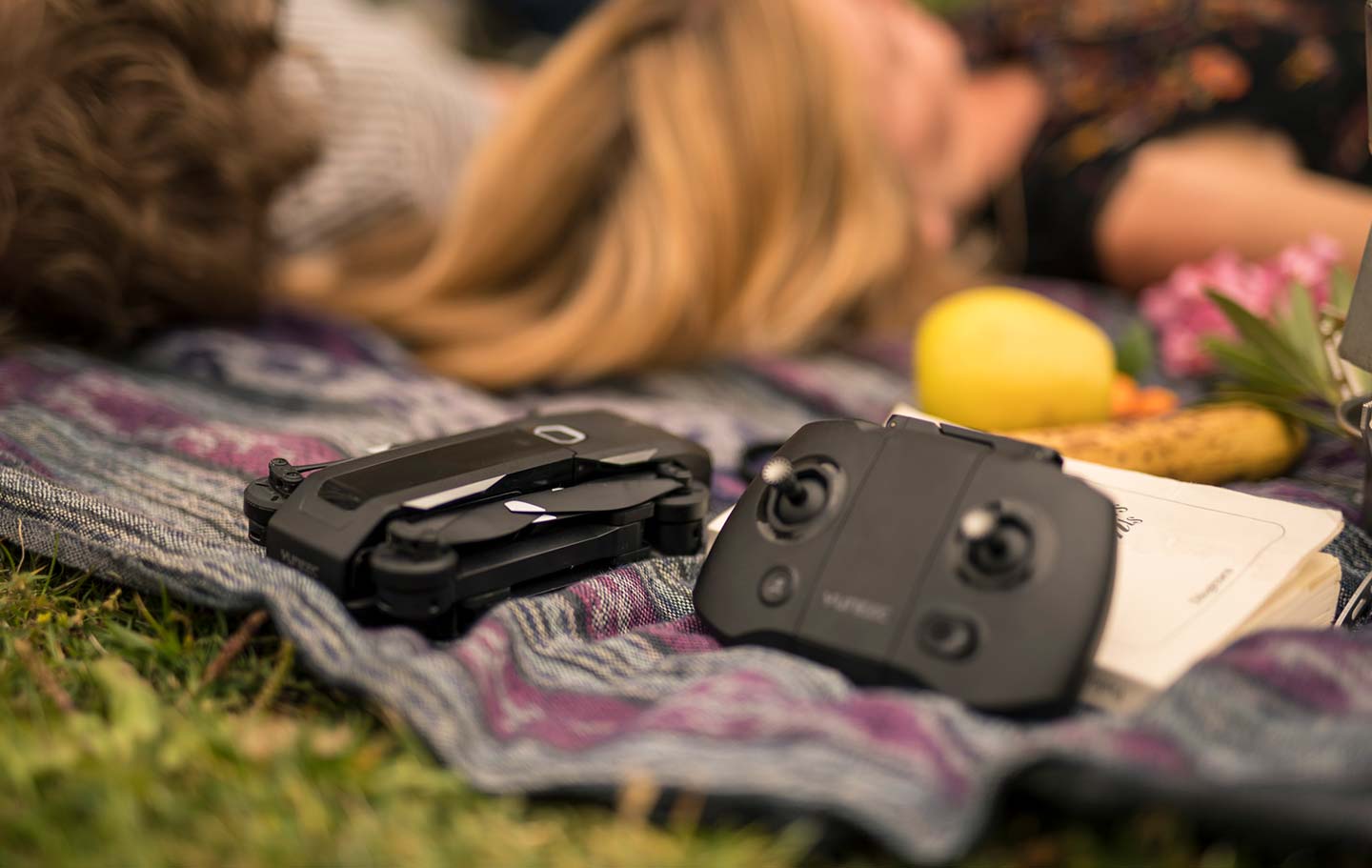 Intuitive voice control and facial recognition
The Mantis Q is Yuneec’s first camera drone that can be controlled intuitively by voice command. Whether for taking off, landing, or recording photos and videos, the small quadrocopter listens for its instructions. The Mantis Q also comes with a facial recognition feature, thus guaranteeing great selfies and videos.

Long flight time thanks to energy-efficient design
Thanks to its energy-efficient design, the handy quadrocopter can stay in the air for up to 33 minutes, thus affording its pilot plenty of time to record great photos and video clips. When folded together, the Mantis Q measures just 168 x 96 x 58 mm and weighs less than 500 g. It’s the ideal companion for big and small adventures alike.

Fast-paced fun while flying
If you want to have some racing fun, use the drone’s zippy Sport Mode. It takes it up to a maximum speed of 72 km/h – and that’s all while flying with the agility of a real racer. The live image can be viewed with a latency of less than 200 ms on a smartphone which is connected to the remote control.

Divisible photo and video recordings
The Mantis Q records photos and videos with the integrated camera. Using the remote control, the camera can be tilted upwards by up to 20 degrees or downwards by 90 degrees during flight.
Pictures with a resolution of 4800×2700 (16:9) or 4160×3120 (4:3) pixels are saved in JPEG or DNG format on the included MicroSD card; the same goes for up to 4K of recorded videos. In up to Full HD (1920×1080), they are electronically stabilized live and within the system via three axes. The electronic image stabilization (EIS) is energy-efficient, solid, and does not require fragile mechanics. For cinematic camera flights, the Mantis Q also comes with automatic flight modes such as Journey or Orbit Me. A practical Social Sharing Function is also included, thus allowing users to post photos and videos directly from the app to social networks.

Intuitive control
The Mantis Q is controlled by the included controller that transmits the video and control signal from up to 800 meters away (CE compliance; 1.5 km for FCC). Since the drone can maintain its position and altitude independently, even without prior training, the Mantis Q is easy and intuitive to fly. In addition, the drone’s flight range can be limited with the help of a virtual fence. Thanks to precise GPS and IPS ultrasound sensors, the Mantis Q can be flown both indoors and outdoors.

Reliable software and data security
The Mantis Q software is based on open source PX4 code, which is known for its stability and reliability. In addition, integrated No Fly Zones prevent the copter from flying into protected areas around international airports. Like all Yuneec drones, the Mantis Q does not transfer any video, photo, or telemetry data to external servers.

Price and availability
The Mantis Q comes with a standard setup that includes a remote control, a battery, spare propellers, and a serial triple charger. It has a retail price of 499 euros. The Mantis Q X Pack is also available. In addition to the drone and controller, it includes three batteries and two sets of spare propellers. It also comes in a small, practical photo bag. The RRP or the Mantis Q X Pack is 599 euros.